The Terra Cotta Warriors of Xi’an are just one of the attractions of a city with ample scope for sightseeing and shopping. A holiday travelling by train across China is a superb way to see more of a country than the traditional tourist destinations – take the opportunity to explore the rest of Xi’an too, you won’t be disappointed.

Ancient capital of China before the rise of Beijing, Xi’an is an imposing Imperial city with all the trappings of power and ambition. However, most visitors turn-up in Xi’an in blissful ignorance of all this, and set on seeing just one thing – the Terracotta Army. Of course, you shouldn’t miss the Terracotta Army – despite the tourist sausage-machine way the Exhibition is set up.

But try to leave yourself enough time to see Xi’an’s main sights too. The Great Goose Pagoda, the Mosque, the Drum Tower & Bell Tower, the City Museum… and the more overtly fun stuff which lies alongside them, such as the outrageous fake “antiques” (“all genuine! very old!”) at the large covered Bazaar in the heart of the old Islamic quarter.. or fakes of a quite different kind on sale in the huge stores in the enormous shopping malls around the Bell Tower.

And well – those Warriors. They are more than an hour’s drive outside town, and unless your Chinese is fluent, taking an excursion is worth considering. They give you a lunch, the obligatory visit to a souvenir-store, but also the remains of an ancient settlement (“where Communism was practiced” – extraordinary the deductions one can make from some broken pots?!) and the marvellous Summer Gardens which saw the very last stand of Imperial privilege against the Reds.

Xi’an is well-equipped with visitor-friendly facilities – bars, cafes, eateries, netcafes, and even a whole street of coffee-shops. Walk off all the extra calories by walking the ancient City Walls after.

Get off the train in Xi’an and step into a lively city packed wih sightseeing and shopping opportunities. You may feel your holiday is not complete without a visit to the Terracotta Warriors – but there’s a lot more to see in Xi’an besides. Yet another fascinating place to explore on a journey travelling the Trans Siberian railway. 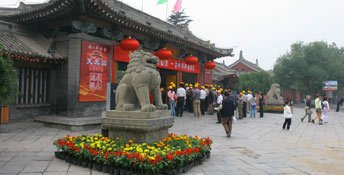