Facts about Ulaanbaatar: it’s the capital of Mongolia, its official currency is the Tugrug, Mongolia’s only University is here, and it gets very, very cold in the Winter (minus 49, anyone?) A trip with Flower Travel gives you the chance to get to know this unique, and slightly strange, capital for yourself. Trans-Siberian becomes Trans-Mongolian rail travel as you cross the border into Mongolia – a country with a population of 2.2 million (the population size of a London borough) spread out across a land-mass three times the size of Germany.

Ulaanbaatar is the world’s most land-locked city. Fixed-location cities are quite a new idea in Mongolia – prior to the arrival of the telegraph, Mongolia’s capital – then called Urga – was a mobile grouping of gers (nomadic tents) that moved according to the cycle of Buddhist festivals. Modern day Urga – now called Ulaanbaatar – “Red Hero” – is a strangely attractive mixture of ancient temples and Buddhist lamaseries, alongside some ugly Soviet-era buildings built as “a gift” for the Mongolians by the USSR. On top of this are new cafes, bars, coffee-shops, internet-cafes and new-agey places. When you consider the city’s remote location – just north of the baking Gobi Desert, and south of the freezing Steppes of Siberia, it’s really remarkable that it’s there at all!

Don’t miss visiting the Gandan Lamasery (”Gandantegchinlen” in full) – the largest and most important Buddhist monastery in the country. Like Tibet, the priest-kings of Mongolia were chosen by the Dalai-Lama in Lhasa – it would always be a Tibetan boy, sent to Mongolia at an early age. The Residence of the Bogdo-Khan (”Priest-King”) can also be visited, as can the Choijin Temple (although it’s now a museum). Don’t miss a chance to see the strange Central Department Store – where you can buy a home cinema system… or a ger.

With the view from the train window changing constantly there’s always something new to see – Ulaanbaatar is another discovery to be made on this magical journey, so much more than ‘just’ a holiday. 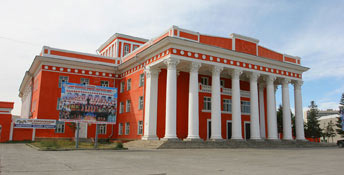