Information on the Altai Mountains, bare facts and figures, cannot begin to convey the magnificence of this incredible mountain range. For that, you have to travel there yourself and that is where we come in – take the Trans Siberian Express deep into the heart of Russia and discover this magical place for yourself.

Siberia’s great Mountain Range, the Altai, rises South of Novosibirsk, and extends all the way to Mongolia. It acts as a vast draught-excluder to hold the chilled arctic air over Siberia, instead of letting it sink to Asia. The Altai “makes” Siberia.

Most of Altai is a huge National Park, an enormous yet sparsely-populated area. There are still groupings of native Altaic people in the Altai – the original Asiatic people of the area who were here long before the Russians came. Ancient festivals, like Ell-Oyn (the summer festival of sports, music and dances) – are still celebrated on alternate years, next in 2006 and 2008. Their heritage is all around you – we can help you to find sites with cave-paintings etc.

Altai holds a special spiritual place in Russian hearts as a “place apart”, of special purity. Even by the 19th century it had developed a “New Age” following amongst spiritualists, connected with the legend of the Lost Kingdom of Belovodia. The secret gateway is alleged to be in the Altai – for the four chosen souls each hundred years permitted to cross to the other side. If you are not chosen, you can still attend other events – like the major Rock/New-Age music and crafts festivals held in Altai. But for the majority of visitors, Altai is simply a stunning background for a wide range of outdoor activities – rafting (from soft to serious), hiking, horse-riding, and more. We have our own trained instructors in Altai, and all the gear too.

In short, the Altai Mountains have something for everyone. Take the train to the heart of Russia for a holiday experience that most people never even dream about. 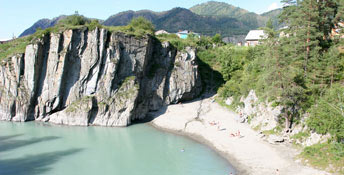