For many, part of the appeal of travelling by train across Russia is the feeling that you are following in the tracks of others who made similar journeys in Russia’s turbulent past.

One of Siberia’s oldest cities, Irkutsk grew rich on the trade in furs and pelts – which were profitably traded for silks and spices from across the border in China. Irkutsk sits on the Angara River, just a short distance (coverable in around an hour by road) from the Angara’s mouth with Lake Baikal.

Irkutsk was one of the centres where the first wave of “intellectual” Siberian exiles gathered – their sentences over, but still banned from returning to Moscow or St Petersburg. The houses of these “Decembrist” exiles (named after their planned December patriotic coup of 1825 to put Tsarevich Alexander on the throne instead of his tyrannical brother) can be visited – even their personal belongings are still on view, adding a touching warmth. Several of these exiles were followed into Siberian exile by their aristocratic wives – who braved incredible dangers and hardships (including being stripped of even the most basic civil rights, along with their titles) to join their husbands.

For most visitors, Irkutsk is principally the gateway to nearby Lake Baikal. However, its charming streets with old wooden houses suggest an era when the journey here was not four cosy nights in the starched sheets of a sleeper-wagon – but over a month of frost-bitten misery, desperate conditions, and nights in flea-bitten roadside taverns… and Irkutsk the welcoming comfort of a substantial city after the hideous journey.

To travel by train across Russia is no ordinary holiday. Irkutsk is a city which helps you connect to Russia’s past; a unique experience and an opportunity not to be missed. 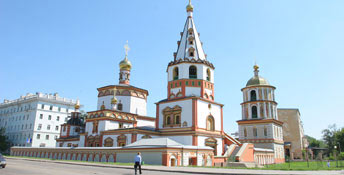