The railway tracks of the Trans Siberian route cut right across the vastness of Russia to Mongolia and almost at the border is the city of Ulan-Ude. Again, not a conventional holiday destination, but a fascinating glimpse of a unique community that falls somewhere between Russian and Mongolian.

As you may expect from such a non-Russian name – you are beyond the orbit of direct Russian culture once you get here. Ulan-Ude is the capital of Buryatia –an Asiatic people native to the Baikal area, and cultural cousins of the Mongolians directly to the South.

Pronounced “OO-lan-OO-day”, the old soviet-style “Ulan-Ude” spelling is sometimes seen too. In any case, both versions are replacements for the town’s Tsaristera title, Verhneudinsk. Located near the Mongolian border, the town’s main business was the trade in tea coming up through Mongolia from China. The town’s population is evenly divided between Asiatic Buryats and Russians – but the town was “russified” from the C17th onwards, when Cossack settlers first came here.

Another grouping found near Ulan-Ude are the Old Believers, a religious sect that split from the main Russian Orthodox Church in the 17th century over doctrinal differences. They can be called “Russia’s Amish”, and many of them likewise don’t seek contact with those outside their communities.

Buddhism has historically been the main religion in Buryatia – the Ivolginsk Lamasery is regarded as the most learned of teaching centres in Russia, and monks come from abroad to study. The Atsagatsky Monastery produced Buryatia’s most famous son – Atsav Dorjiev, the man who might have made Russia a Buddhist nation, had not Communism come along at the identical moment. The monasteries, and trips to Baikal are the main attraction – the city is largely grimy, but you shouldn’t miss the Largest Head Of Lenin In The World.

Each new stop on the Trans-Siberian Express brings new discoveries – creating a holiday experience unlike anything else you have ever done. 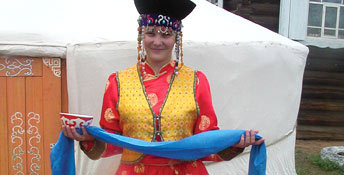