A holiday travelling on the Trans-Siberian railway across the vast expanse of the Eurasian landmass is truly a journey of extremes. From the Russian Steppes, to the Gers of Mongolia, the train travels on to Shanghai, one of the largest cities in the world.

China’s financial capital and its largest city – somewhere near 32 million people… making it one of the world’s largest cities.The blend of “old” and “new” is most obvious if you wander down to The Bund – the old part of town (which still has the name given it by German traders). The Yangzi’s banks here are lined with the former trading-houses of 19th Century European ventures – but look across the river, for a 21st Century skyline of entirely contemporary Chinese architecture. Other places not to miss during your stay in Shangai are Century Park – a great place to escape from the teeming streets and relax. The modern picture of cutting-edge technology in China is on view at the Science & Technology Museum- a huge glistening exhibition which is the largest in Asia, with lots of interactive things to see and do. By way of contrast wander down to the Yuyuan Gardens (traditional Chinese pagoda buildings) or Xin Tian Di – the old area of tiny streets and old buildings, which is now a bohemian area of cafes, pubs, pizzerias, coffee-shops and generally a great place for hanging out.

The whole of Shanghai is full of restaurants, but if you want one with a difference, then head to the Pudong area and ascend the Pearl Tower (be ready to queue!) – at the top there’s a restaurant serving phenomenal views over the whole city as a garnish to the food itself.

Shanghai is an amazing city, packed with things to see and do…and eat! A holiday which includes a trip to Shanghai is one which will provide vivid memories for years to come. 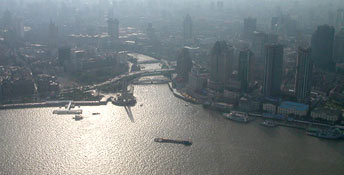