Including Ekaterinburg in a holiday itinerary would have been an impossibility in the not too distant past – hidden away in the heart of the Urals, it has been the backdrop for things which Russia wanted to keep quiet – including some very dark moments in Russia’s history. Now of course you can travel there by train, and discover this fascinating city on your great Russian adventure.

Russia’s third city, safely secured in the heartlands of the Urals Mountains, has used its unique position (abundant mineral resources, metallic ores, skilled labour and distance from national borders) to special advantage – all kinds of secret or unusual things have taken place here!

The city’s founder – like St Petersburg – was Tsar Peter the Great, who named it after his third wife, Empress Ekaterina. Iron-ore for making ordnance was the original attraction – Peter’s warlike campaigns needed lots of munitions. However, the early settlers quickly found more lucrative pickings – silver, precious and semi-precious stones, diamonds… and gold, sparking the first Russian gold-rush, making the city rich overnight. The munitions tradition continues – to this day Ekaterinburg is Russia’s major producer of tanks, armoured cars, and military aircraft. In fact it was so top-secret in the Soviet era that the city was off-limits to foreigners – it’s only been opened recently.

Another of the city’s darker secrets was the Assassination of the Last Tsar and his family, in 1918. They’d been brought to this ‘hidden’ location to prevent any escape plans, and were murdered by the Communists in the safe-house where they were held. There is a Cathedral now on the site, which can be visited. The Urals Mountains location makes the surrounding area hugely rewarding for all kinds of outdoor activites – hiking, rafting or skiing for the active, or a low-impact visit to a preserved Siberian village for a more relaxed time! Continents meet here – the Europe-Asia border is just outside town.

A significant part of Russia’s history, Ekaterinburg is another amazing destination on your holiday of a lifetime – step off the train here and discover a city which, until recently, was completely closed off to Westerners. 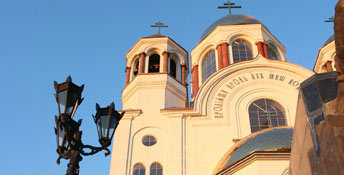