Trans-Mongolian rail travel provides an opportunity few Westerners have availed themselves of: the chance to get to grips with the difference between ‘Inner’ and ‘Outer’ Mongolia! Huhehot, the capital of Inner Mongolia offers more by way of amenities and luxury than the Outer Mongolia stretch of the journey – you may be ready for a little pampered living when you have followed the Trans-Mongolian railway this far.

However you spell it Huhehot/Hohhot is capital of what is now the Inner Mongolian Autonomous Region of China. Why “Inner” and “Outer” Mongolia? When the Chinese overran Mongolia they created two administrative regions. “Inner” Mongolia (“Inner” being nearer to Beijing) was the ‘civilised’ part, with more temples and pagodas, and developed cities. Beyond lay Outer Mongolia – a region under military justice, without real cities, inhabited by nomads, of little commercial value. Centuries later, faced with a civil war from (USSR-backed) Outer Mongolians demanding independence, Beijing cut its losses and decided to defend only the Inner Mongolian part – and write off the loss of Outer Mongolia (in 1924) as no serious matter. To prevent nationalist feelings rising in Inner Mongolia, ethnic Han Chinese were resettled there on a ratio of 10 Chinese to 1 Mongolian.

Despite this, some elements of Mongolian culture remain, notably the rich monuments and legacy which made it worth defending from the Outer Mongolians. Chief amongst these are the Buddhist Monastery, and the Wuta Si Pagoda, also called the Pagoda of One Thousand Buddhas (in fact there are nearly 1,250). Wuta Si also has a unique Map of Mongolian Cosmography preserved in stone.

Huhehot is a sizeable city with lots of nice amenities and nice hotels, and excellent places to eat. If you’ve already had ”real” Mongolian food in Outer Mongolia, you’ll find that having to eat Chinese food in Huhehot is not,  perhaps, the cop-out it originally sounded.

A holiday travelling on the Trans-Mongolian stretch of the Trans-Siberian railway is a way to get to know Mongolia at a ‘grass roots’ level – it is a beautiful country, of great contrasts, with Inner and Outer Mongolia quite different in many ways. 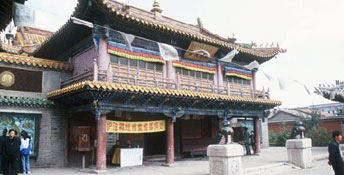