Created for the 50th Anniversary of the publication of Dr Zhivago

Moscow to Beijing (contact us for itinerary in reverse) 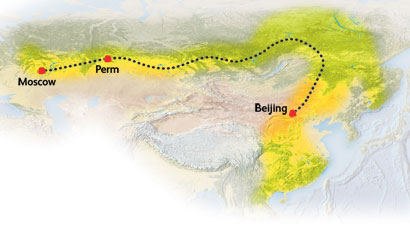 Trip Price starts from $2985 per person

2007 was the 50th Anniversary of the legendary novel Dr Zhivago, by Boris Pasternak. Banned from any publication in the USSR, the book was smuggled to Italy for publication in 1957, and was soon translated and published all over the world. Although awarded the Nobel Prize for Literature, the USSR refused to allow Pasternak to attend the Award Ceremony, and he died soon after.

Zhivago is the story of the Russian Revolution, told through the (fictional) life of one man, Dr Yuri Zhivago. Many of the names in the story have resonances which can’t be translated. Yuri’s name is Zhivago, in which the word “zhiv” (alive, living) is clear. His rival for Lara’s love is Komarovsky – from the Russian word for a mosquito. Yet Lara’s own husband has forgotten her, and changed his name to become the deadly agent of Soviet power, Strelnikov (“the shooter”).

The idea for Dr Zhivago began in Perm, the town to which Pasternak had been evacuated in World War Two (or The Great Patriotic War as the Russians know it)– the town appears in the book under the fictional name of “Yuriatin”, and it’s the setting for Yuri’s meetings with Lara. Obviously, Yuri Zhivago was a fictional character, and did not have an “address” we can show you today

But the story is based on real places (which could never have been included in the famous film, shot at the height of the Cold War), and we show them to you on this special itinerary, along with other “hidden” sights from the same era which establish the historical background to the book.

S Priezdom! Welcome to Moscow!” Our driver will be there to meet you from whichever flight, train or boat you arrive. You’ll then be transferred to the Irbis 3H Hotel. The facilities available at this hotel include a Restaurant, Lobby Bar, Lobby Wi-Fi access, Luggage Room, Safety deposit boxes and an ATM machine. At check-in, (after 2pm) the hotel reception will advise you they will need your passport for visa registration. This process takes 1–2 hours. Your complimentary InfoPack is full of ideas for getting the most out of your free time.

After breakfast one of our local expert staff will meet you at the hotel to take you on a three hour walking tour round the highlights – you’ll use public transport around the centre to avoid the traffic jams and get the hang of the system for when you come to use it independently. Our staffers are full of ideas for this walk but are flexible about other ideas if you have your own. Your walk ends in the city centre around lunchtime.

If you haven’t prebooked any of our range of city excursions the rest of the day is your own to explore further. Some of our top suggestions (please check opening times/days before setting off) would include visiting the Moscow Kremlin, the Tretyakov Gallery, the Pushkin Fine Arts Museum, or a boat trip along the Mosvka River… perhaps locate some tickets for ballet, opera, circus or a concert this evening? As well as famous classical music traditions Moscow features on the touring schedules of world names in jazz, rock, pop and world music.

You’ll need to check out of your room by 12 noon today but the hotel offers a Left Luggage service for a small fee. Your day is free until 9pm, when a driver is scheduled to take you to the station. This morning you can continue sightseeing – the Lenin Mausoleum is only open in the mornings, and getting there early (it’s in Red Square) helps beat the queues.

Although there’s a restaurant car service on board your train you may want to supplement this with some snacks, treats, and fresh fruit that you could buy today. Your transfer from the hotel to Yaroslavsky station is scheduled for 4 pm, so please be at the hotel reception where your driver will meet you and will assist your boarding of the Perm bound train.

Your first full day on board the Trans-Sib… There will be plenty of time to meet fellow travellers and hang out in the dining car which serves a variety of meals and snacks reasonably priced. Evening arrive in Perm where our driver will meet you at the end of the platform and will be holding a meeting-board with your name on. Transfer to the Hotel Ural, which is located in the cultural and historical centre of Perm.

We start at the Pushkin Library, which was the Public Reading Room where Yuri and Lara first meet in the book. In the novel we hear that it was behind the “Giant” cinema; it’s actually behind the “Triumph” cinema. Across the street is the city’s leafy Central Square, where you can easily imagine Yuri and Lara must have gone after they first met and sat on a park bench opposite the Opera House. Nearby the nightmare realities of Zhivago’s time interrupt our dreams – the small former hotel where Tsar Nicholas II’s brother was staying on his way to Ekaterinburg, where the Royal Family were imprisoned in 1918. In fact Grand Prince Mikhail was the last Tsar of all but he never knew. Our tour reveals the bizarre secret, and its British connection.

Nearby is a small wooden two-storey house which is “Lara’s house”. In fact it is just another private house (ie you can’t visit) in the city, but careful reading of the book identifies the exact location, opposite the imposing C19th palace across the road. A few blocks from the mansion is the hospital where Lara works in the novel. There’s a chance to see some imposing houses built by wealthy C19th merchants. You can imagine Komarovsky must have had friends to stay with here.

Not far away is the River Pier district. Before the Trans-Siberian Railway was built, travellers to Siberia would come by boat from Moscow this far and disembark, and the Great Siberian Tract (the old Post Road) began from this point. Chain-ganged convicts would be brought here at night, for fear of frightening local people with their terrible fate and force marched to Siberia on foot. The Old Razvilje Railway Station was then built here. It was from here that the Trans-Siberian Railway originally departed (it was only later linked back as far as Moscow), and this is where Komarovsky’s private “Government train” waited for him. The Siberian convicts had to march for months to their destination – you, however, only have another ten minutes walk to get to the “Dr Zhivago” Restaurant for lunch. Afternoon free to explore Perm’s shops and extensive museums and galleries (Perm is a major location for fossil-hunters, the Permian period takes its name from the city, and there’s lots in the museums).

Evening free – there might even be a performance of the opera “Dr Zhivago” (yes, there really is one..) at the Opera Theatre. Remainder of the day free to explore more of Perm.

Full day excursion to the Gulag Museum, housed in the only surviving* soviet-era Gulag now visit able in Russia. En-route we pass small villages which must have been the inspiration for the one where Yuri & Larissa hid out from the Secret Police. Evening return to Perm.

*well to be honest there is one other, but it’s on the Russian Arctic Pacific coast, 900 miles from any rail stop, and only accessible by chartered helicopter.

Free day in Perm to explore the rest of this pleasant Urals city then evening transfer to the station where you will board the Beijing bound train.
Breakfast.

Day 8 - On board the Trans-Manchurian Express

On board The Trans-Sib… travelling eastwards via the Chinese Manchurian frontier with Russia. (This is the route by which Komarovsky kidnaps Lara in the book, in a private train) The dining car is a great place to meet fellow travellers and locals alike, sharing your experiences of your journey so far with a few drinks, which no doubt will include some Vodka!

Morning arrival at Beijing Central Station. For services in China and beyond please click here.

MOSCOW: transfer on arrival to your hotel, 2 nights 3H hotel with breakfast, 3 hour personalised walking tour with local expert. Transfer to the station on departure

PERM: Transfer on arrival to your hotel, 3 nights 3H hotel with breakfast, excursions and walking tour as per itinerary, transfer to the station on departure.

We have a range of airline tickets which fit in well with our trips. Run your flight requirements past us before confirming your flight arrangements.

Please give us a call if you would like to take this trip ‘in reverse’ starting in Beijing. This itinerary can be incorporated into many of our ‘standard’ trans-Siberian itineraries. Again, contact us if you are interested.

Due to the nature of these destinations all prices are subject to change. Contact us to confirm exact price.