Food on The Train – Siberian Railway

What is the food like on the trans-Siberian railway?

This journey covers a diverse range of cuisine. You will enjoy regional Chinese meals and nomadic cooking in Mongolia. Cuisine in Russia used to be quite basic but nowadays it is on par with Europe as a whole. In Siberia the meals can still be described as ‘hearty’ but a world of options become available once you reach Moscow and St Petersburg.

How much should I budget for food

It is always difficult to provide budgets for food on any holiday but in general you should budget:

Around US$20 per day in China for everyday meals.

If you are willing to eat like a local in Ulaanbaatar also budget around US$20 per day. (Food is included when staying at the Gers) to eat at the more up market restaurants in China and Mongolia you will need at least US$35+ per day

For Russia, meals in Siberia are less expensive but once you reach Moscow and St Petersburg prices are on a par with the most expensive cities of Europe, and although there are some cheap eating options a restaurant meal will cost between US$10 and US$35.

Eating onboard the trans-Siberian railway

There is a general international agreement on all international long distance rail trips that restaurant car services are provided by the national railways of each country you are crossing through. Locomotives and passenger cars cross borders but dining cars do not. So it is quite possible to be on a Russian train in China (or a Chinese train in Russia) but it is the host country that you are travelling in that provides the food services on board.

Note that the Mongolian dining car is an ornate affair and even if you are not going to eat there its worth a trip for a photo.

“The dining cars were a bit tricky – firstly finding them, then working out when they were open. Dinner in the Chinese diner was fine. At the border crossing a fabulous Mongolian diner was attached – we were told by someone on board to at least see it, so we went to find it. The train seemed longer, and it was the last car – but it was well worth the walk. We can send you photos if you like, as it really is something to behold!” Louise and Tony – October 2019

On board the trains, there will be limited and (let’s be honest) overpriced meals on offer (budget for around US$10-US$12 for a small meal with drink). Chinese and Mongolian trains serve standard local fare, including rice, vegetables, chicken and mutton. The restaurant car staff also offer a drinks/snack service down the whole train at regular intervals.

The Russian menu is limited but not too bad. The dining car in Russia serve hearty meals, usually including soup, salad and meat mains however on some of the shorter journeys a dining car may not be available. Most locals are not interested in paying dining car prices and usually prefer to prepare picnics in their compartment – often sharing local delicacies with fellow travellers; both western and locals. At stops along the way there are many street stalls and small kiosks to purchase drinks and snacks. Large markets and bazaars have a wide range of fruit, vegetables, bread, meats and other foods. Our local representatives can usually advise before your specific trip whether there will be a dining car on the train. For example our partners in Mongolia will stop off at a supermarket for you to purchase provisions before dropping you at the station for the UlaanBaatar to Irkutsk rail journey which usually does not have a dining car.

What about special diets on the trans-Siberian railway?

Vegetarians do need to come prepared for some challenges in Mongolia and China but won’t have any problems whilst in Russia. Many of our travellers are vegetarian and report no major issues.

However food allergies are not well catered for even in the major cities. In particular we have had clients struggle with keeping a medically necessary gluten free diet in Russia; it is not taken very seriously as many Russians think gluten free is a western fashion! If you have a food allergy it’s really important to be able to recognize ingredients in Cyrillic Russian language. Our guides can assist with translations in supermarkets. 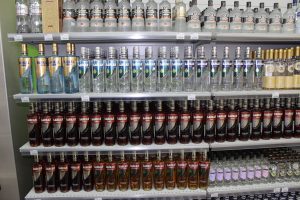 Traditional Russian tea is served strong and black and can be taken with a spoonful of sweet jam. Green tea is dominant in China. Mongolian tea is a mixture of milk, black tea and salt! Tap water is generally not safe to drink. Bottled water is readily available – although sparkling water is more common in Russia. UHT milk is widely available in small/medium sized cartons.

Each compartment on the train has a samovar providing a constant source of boiling water. If you love your tea and coffee just the way you like it then we urge you to bring a reasonable supply of instant coffee and a heat proof mug. The stuff served on the train is very ordinary! And of course the samovar does provide the opportunity for preparing pot noodles; a delicacy that became something of a trans-Siberian cliché back in the 1990s.

Wine is available but best for those with a sweet tooth. Beer is widely available and often cheaper than water. Vodka of course is the national drink in Russia and, to some extent, Mongolia. It is taken in shots and remember to always eat when drinking vodka! That’s the way Russians do it.

Remember that most locals wouldn’t pay the dining car prices for drinks or food so there is no restriction on bringing your own alcohol on board the train.